Modern American chef, restauranteur, and native San Diegan, Steve Brown, is returning to his hometown of Imperial Beach to launch a shipping yard inspired, 4,000 square foot, multi-level restaurant on the corner of Dave Avenue and Seacoast Drive, mere steps from the ocean. While his restaurant is under construction, Chef Brown is also launching a series of 7-course meals and wine pairing pop-up events, under the name of “Cosecha”, taking place from San Diego to Los Angeles starting this July, in addition to his catering company.
Chef Brown’s first pop-up dining event will take place at Gustatory in Coronado on July 9, starting at 6:15pm at the cost of $80 per person, and will include a pre-dinner cocktail and a 7-course dinner paired with exclusive wines. The events will serve farm-driven, modern-American dishes with subtle Mexican influence, sourcing produce from Wild Willow Farms, but every menu will vary depending on location and vibe. Chef Brown has also currently launched his special event catering company “Harvest”, and is partnering with Dodger Stadium to do a Chef’s Table Dinner early this July. 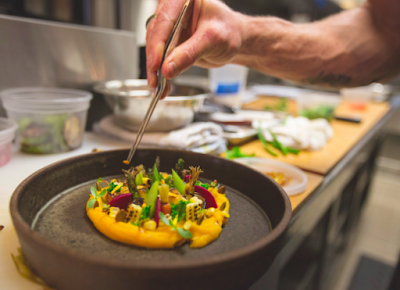 Chef Brown’s yet-to-be-named Imperial Beach restaurant will be open-air, embracing the fast-casual beach atmosphere of the neighborhood. It will serve modern comfort food paired with a local craft beer & cocktail program and is expected to open in early 2017.
Chef Brown started his culinary career in Garmisch, Germany, in 1999 at the age of 18 as a dishwasher in a hotel, falling in love with food and the chef-life. After two and half years in Europe, he returned to Los Angeles to attend Le Cordon Blue culinary school. Chef Brown has worked with many great Chefs like Chef Jake Rojas of Tallulah on Thame and Chef Marcel Vigneron of Wolf, and many great fine dining kitchens from Palm springs to Los Angeles and San Diego. He was the head chef of Brockton Villa in La Jolla in 2006-2007.